Echofluxx has own specific international atmosphere and introduces artists from over the world, mainly from USA and Czech Republic. 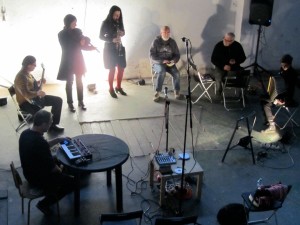 This year, I had an opportunity to participate on the program in various ways – solo recital Ideas and Techniques on May 6th, premiere of my new piece Flute and Tape, commissioned by Lenka Kozderková on 9th and also as a memeber of the Echofluxx Ensemble at the end of the festival on 10th.

The festival events were very well documented, so you can experience the unique space and acoustics of Trafačka Arena in Prague through these videorecordings:

Review of the festival for the Assymetry Music Magazine by Michael E. Karman.